How Does Ice Melt Effect Landscaping?

There are several types of products used to manage snow and ice during winter months.  Rock salt (Sodium chloride) is one of the most commonly used de-icers.  It is inexpensive and very effective, but unfortunately can be potentially harmful to certain surfaces and plants that may be nearby.

Other types of products contain minerals like potassium, magnesium, or calcium.  These types of products are less likely to cause damage to the landscaping plants and hardscapes.  The downside is that they are more expensive than rock salt and may be more or less effective, depending on the temperature.

When rock salt is used to melt ice and snow, the salt dissolves in the snow.  The sodium separates from the chloride, and the chloride is absorbed by plant and turf roots.  This may cause damage to plant cells resulting in yellowing or browning of the foliage.  The salt that remains in the soil can burn roots and prevent vital nutrients from being absorbed during the growing season.  Salt, in high concentrations, can also draw moisture out of plant tissues.

During the winter, many trees and shrubs don’t need a lot of water since they are not actively growing.  In the spring, when the leaves flush salts in the soil can cause drought-like symptoms and result in damage or death of new foliage.

Ice melt damage may take a long time to appear.  Severity of symptoms may vary based on the type of plant, the concentration of salt or other minerals, and rainfall.  Signs the landscape may have suffered damage from de-icing chemicals are:

Damage can extend beyond the borders of pavement like roads and sidewalks.  Spray from plows and passing vehicles can spread salt into surrounding planting beds resulting in further damage to shrubs.  Pedestrian traffic also moves ice melt products through the landscape – especially if people and animals walk between paved areas and lawn or planting areas.

The good news is that ice melt damage does not have to be a death sentence for plants and turf.  Lawns will typically recover on their own.  Turf roots are shallow and it does not take long for any excess salt or mineral concentrations to become diluted during spring.  If signs of damage appear in spring, the use of a gypsum-based fertilizer will also help to counteract the higher concentration of minerals in the soil. 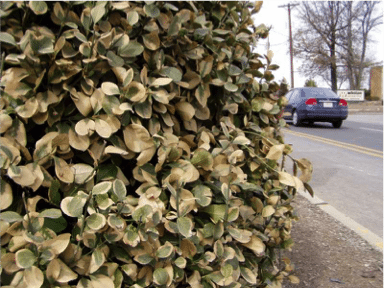 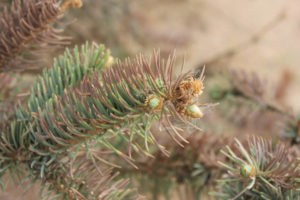 While damage resulting from ice melt applications is reversible, it is best to prevent it in the first place.  Proper application of ice melt products coupled with adequate, but not excessive, product use can minimize damage to plants and lawns that are near drive-lanes and walkways.  Here are 5 best practices when it comes to ice melt usage: 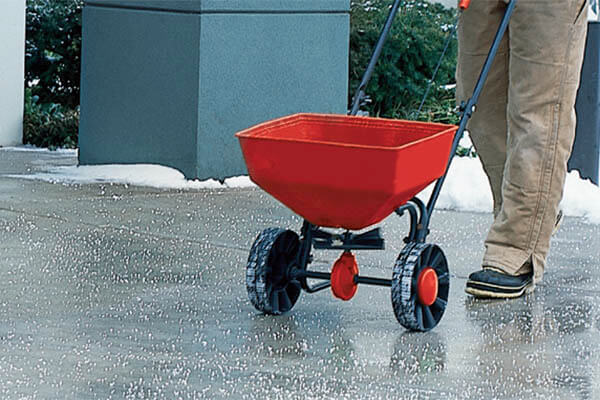