It is ironic that the most common cause of damage to an irrigation system is water.  Obviously not water in its liquid form, but rather the frozen variety. While it may seem that turning off the water and making sure the controller is in the off position would be enough to put an irrigation system to bed for the winter, those are just a small part of the process. 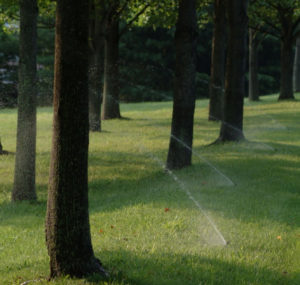 How Winter Damages Your Irrigation System

Every time an irrigation system runs, small amounts of water remain in the pipes, valves heads, and backflow even after the water has stopped. During the growing season, this isn’t anything to get concerned with so long as the water isn’t leaking or puddling anywhere.  During the winter – it’s a whole different story.  That same water can cause widespread damage if allowed to remain inside the system components.  Freezing and thawing shatters small delicate parts like nozzles and heads rendering them useless come spring time. 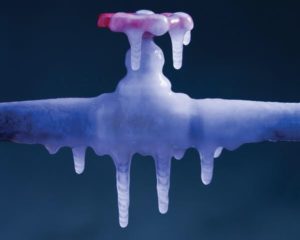 Ice can also weaken pipe walls, meaning the system could run fine initially but then have an unexpected break somewhere below the surface later in the season. And the worst possible result of water in the system – a broken backflow or water source pipe.  No one wants Mr. Freeze’s Winter Wonderland in their water room or basement because a critical pipe burst and refroze. 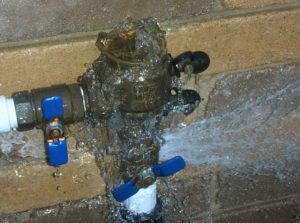 How to Prevent Winter Damage

To avoid all of those “worst case scenarios” this winter, have your irrigation system properly winterized by having a professional perform an irrigation blow out. They will first turn the water off at the mainline source.  Next, an air compressor is used to blow even the smallest droplets of water out of each of the zones one by one (hence the term “blow out”).

Once all zones are blown clear, they will set the controller to the off position and may even unplug it from the direct power source.  If you prefer extra added assurance that there is no chance for the water to be turned back on before it is seasonally recommended, they can even disconnect your backflow for the winter months and reconnect it at the spring turn on service.

In the Mid-Atlantic, Thanksgiving is a good target date to have your irrigation system winterized and your irrigation blow out performed, but each region is different.  Check the historical first freeze dates and make sure you have the service performed before that date.

If you are ready to have your irrigation system winterized, please call today and we will schedule one of our irrigation professionals to service your property.

Fill out the form today!